What should you do when your child wants to quit a sport? What if he stinks at it? What if it’s hard? What if it requires more of a time commitment than you initially thought? Here’s what happened with our son during youth basketball season last fall…

Back in the fall, high from the euphoria of playing soccer with his best friends, my son wanted to continue the fun in another sport. He chose youth basketball through our local YMCA, so we enrolled him. His excitement came to a screeching halt when we went to his first practice.

None of his friends were there. He knew one girl from preschool, but he’s still in that boys-only stage of friends, as boys often are in Kindergarten. The kids who were on the team just weren’t that into him. They were older — first graders — and had been playing for several years already.

Finally, he just wasn’t good at basketball. Even by the end of the season he could barely make a basket in practice and never made a single one during a game. I ashamedly admit that I was embarrassed by how bad he was during that first practice, but my friend (who’s very good at basketball) pointed out that almost all kids stink at that stage.

So, needless to say, basketball wasn’t as much fun for him as soccer was. BUT, we didn’t let him quit. Here’s why… 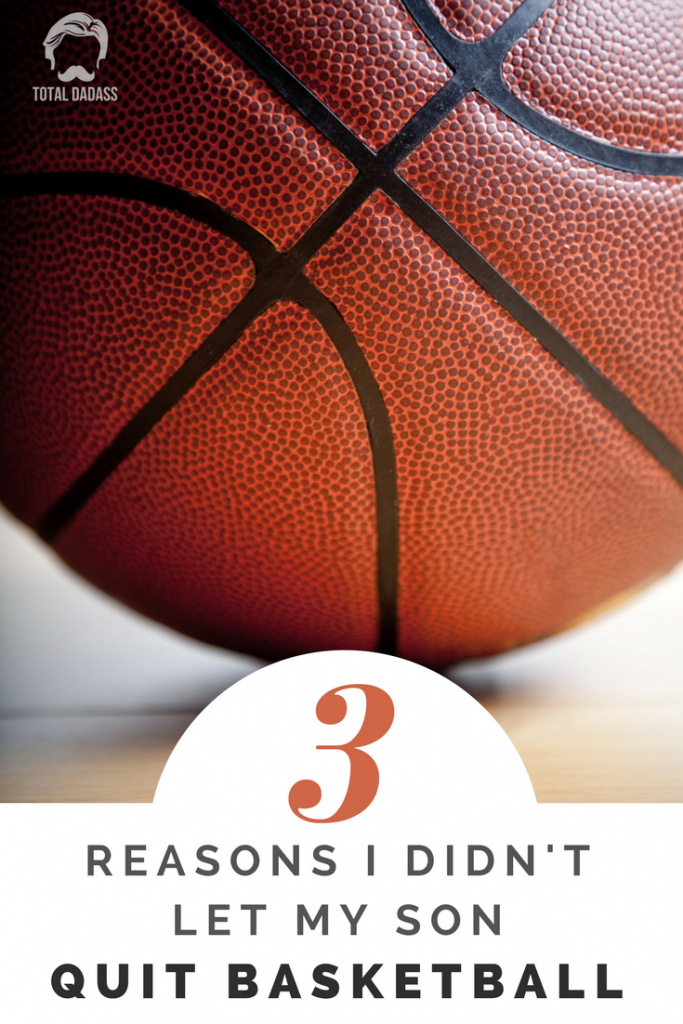 1. You’ll never acquire new skills if you quit everything you aren’t immediately good at.

It’s all too easy to quit something when you don’t have an immediate knack for it. It’s far harder to continue when you see you have a lot of work to do to improve. However, I think it’s character-building to plug along and make an effort, at least for a season or two.

Think of your first day at a new job — are you immediately great at everything? Do you excel at every task required of you in those first days and weeks? No! Or at least, I didn’t. When you take on something new, even if it’s just with new team members in a new environment, you experience a learning curve. That’s part of life.

2. A team relies on all of its members. Giving up means letting your team down.

As I said, I’m ashamed to admit that I was embarrassed for my son during that first practice. Thankfully, my wife and my friend made me see sense. It didn’t matter that he wasn’t great at the game. He showed up to every practice and every game, which is more than I can say for every other player on that team.

During one game, only my son and one other boy showed up. My son didn’t contribute much except enthusiasm for getting out there and running around with his very talented teammate, but he showed up, and he put in an effort. He did make an assist, which we were so proud of him for. Amazingly, they won this game.

During another game, only two of his teammates showed up, so they played with three players. One of the boys threw a tantrum and refused to play for more than half the game. This time, the other team contributed some players to ours to make it more even. This was the only game we lost. It would have been a sure win had the other players shown up.

Learning the importance of teamwork is an important life lesson.

3. Honoring your commitments is important.

As you might have guessed, this was a nightmare season in more ways than one. In addition to many of the kids not showing up for several games, my son’s coach was a no-show for every practice except the first one. He’d call last minute and ask for one of the parents to coach practice instead. So, while he is a great local basketball player, our kids didn’t learn a thing from him because he didn’t honor his commitment to the team.

And some of the other kids and parent’s didn’t honor their commitments, either.

Showing up is half the battle.

Sticking with basketball despite his friends not being on the team and despite not being very good at it taught our son (and us) the valuable lessons we mentioned above, which we won’t soon forget.

Have any of your kids ever wanted to quit an activity? What will you do when your child wants to quit a sport? Let us know in the comments!

6 Life Lessons Your Kids Can Learn from Sports »